Vek is a partial albino gnoll, called an albinoid, with pale blond fur and faded hyena-like markings indicative of all gnolls. His chest hair has a blaze of pure white fur that earned him his name of Ember-heart.

He usually dresses practically in robes of his faith with an Osrian flavor to them, or combat leathers as needed.

Vek’s Templar mark appears as a raised hair-less scar on the inner part of his right forearm.

Vek was born to a nomadic gnoll slaver tribe of Katapesh. His mother, finding him to be a partial Albino by birth, left him to die in the desert as a sacrifice to Lamashtu. Her hope was to offer her weak pup’s life to the demon-goddess for a chance at a stronger child on her next birthing.

Vek would have died quickly enough, but for several strange circumstances:

Arc’kath, a native Osirian and ardent follower of Saranrae was journeying to visit the goddess’ largest temple in Katapesh at Solku. On his journey there, for the first time ever in his life, he got lost for a few hours in the dunes of the desert, a strange enough occurrence for a desert druid.

Imagine his surprise at finding a gnoll pup, still covered in the dried blood of its horrific birth (most gnolls rip the pups out of the mothers as a crude form of a cesarean birth rite to Lamashtu) lay upon a flat rock in the middle of the desert. On it’s chest was resting a large gold-tinged scorpion. While unsure if the pup was alive, Arc’kath moved closer to investigate without hesitation seeing a divine hand in his situation.

Amazingly, arranged around the pup appeared to be the corpses of various scavengers. Buzzards, jackals, even a hyena lay nearby. Upon approaching the scene the scorpion turned from its position on the pup’s chest. and raised its stinger and clacked its claws at Arc’kath in a defensive position, but did not leave the pup’s chest.

Arc’kath, in the manner of all druids, offered the beast no animosity and attempted to commune with the strange scorpion. The scorpion seemed to calm quickly, clicked its claws once again, and left the pup to scurry under a rock a short distance away.

To his amazement the pup was still alive, if barely. The scavengers were alive also, and only paralyzed he quickly discovered. What was all of this? Why was this strange scorpion protecting the gnoll pup?

Once he saw the patch of pure white fur on the pup’s chest he knew his answer quickly enough. The pup had the scorpion sitting still on its chest long enough, that it’s presence not only left the fur perfectly clean and a pure white, the rest of his fur would never match, but it also was in the shape of Sarenrae’s holy symbol of the angelic goddess, wings and arms outstretched. Arc’kath claimed the pup as his own child that day, and named him Vek’kath Ember-Heart for the permanent blaze of white fur on his chest.

Since that day Vek’kath has lived mostly within the Temples of Sarenrae in Osirion to protect his life from those who would persecute him for his race. He managed several journeys with his adopted father as emissary to various temples in the region as well, including to one of the minor temples of Katapesh. He marveled at his ability to wander the capitol city there without hiding his presence or needing protection, although he instantly disliked all the gnolls he met and the slavery they embraced.

Now old enough to seek his fate, and whatever his goddesss has planned for him, Vek’kath has returned to the land of his birth hoping to find a place for himself among the dunes of Katapesh. He has no illusions that he can turn the gnoll race to good ends, but feels he might at least be an example for others, both gnoll and otherwise, to rise above their evil tendencies and seek the light. 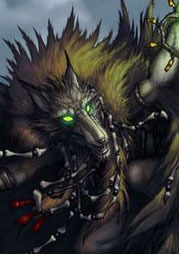