Cyclone, Scythe of Wind and Thunder 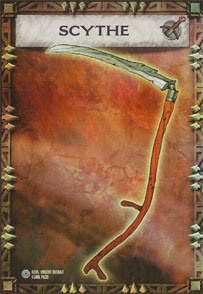 Cyclone is a wicked looking cold iron scythe. Originally Cyclone was a battle axe, but at some point was broken and then reforged as a scythe. Close inspection reveals miniscule seams where the shattered pieces of the battle axe were melded together to for the scythe’s blade. The scythe is unusally light for a weapon of its size and is easy to carry and swing. The weapon is also extraordinarily noisy when struck against things or used in combat.

Legendary Power: Cyclone grants it’s wielder 4 points of legendary power a day that can be used for mythic surges on attack rolls and to confirm criticals with the scythe.

Mythic Keen: Cyclone has a total threat range of 18-20 and grants +2 to confirm criticals.

Thunderclap: cyclone can cast Shout once per day.

Cyclone Form: As a move action you may spend a use of legendary power and transform into a whirlwind as if you were a medium air elemental. You may remain in this form for a number of rounds equal to your mythic tier. While in this form you may use the scythe’s damage (including enhancement bonus) in place of your slam attack.

Mythic Vorpal: The wielder may spend a legendary power to make the weapon count as a vorpal weapon against non-mythic targets for 1 round per mythic tier.

Cyclone, Scythe of Wind and Thunder