Tempest, Sword of Wind and Lightning 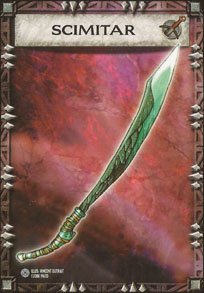 Tempest is a legendary scimitar made from an unknown greenish-blue metal. The hilt has no crossguard and has obviously been broken at some point and is held together by a tightly wrapped shagreen and stringy redish mold. When the wielder holds the hilt the mold comes alive and wraps itself around the wielder’s hand. Anyone who bonds with Tempest becomes infected by the mold, which is apparent from red tendrils that cover their hands and forearms. Bonding with the sword in this way allows the bearer to become empathically linked with Vardishal, the genie spirit that is bound to the sword.

When looking at Tempest you can see turbulent storm clouds in the reflection on the blade’s metal. Also during combat electrical arcs dance across the weapon’s blade.

Legendary Abilities
Legendary power: Tempest grants its wielder 2 points of legendary power a day that can be used for surges on attack rolls with the scimitar.

The Spirit of Vardishal: Mortally wounded the janni Vardishal made a final wish that bound his soul to his sword. Unfortunally the sword was broken afterwards, keeping Vardishal from exerting his full will upon the sword. Vardishal currently has an Intelligence of 18, a Wisdom of 18, a Charisma of 18, and an Ego score of 18. He can communicate with Tempest’s bearer telepathically and he can deny the bearer the use of Tempest’s legendary abilities if the bearer commits acts of evil.

Resistance: The scimitar grants Resistance to Fire 30 when held.

Granted Spellcasting: The wielder can cast cure moderate wounds (wielder only) 3/day, Gust of wind 3/day, Bless 3/day, . The caster level for these spells is equal to the wielder’s character level.

Dedicated Powers
In addition to the legendary abilities, Vardishal grants a number of abilities to the wielder of tempest. These powers only work when actively confronting Jhavhul, his minions or allies.

Blast of wind: On a critical hit the wielder may makes a free bull rush. The CMB for this attack is equal to the caster level of the weapon and a STR 25 (+7). This bull rush does not provoke an AOO.

Tempest, Sword of Wind and Lightning